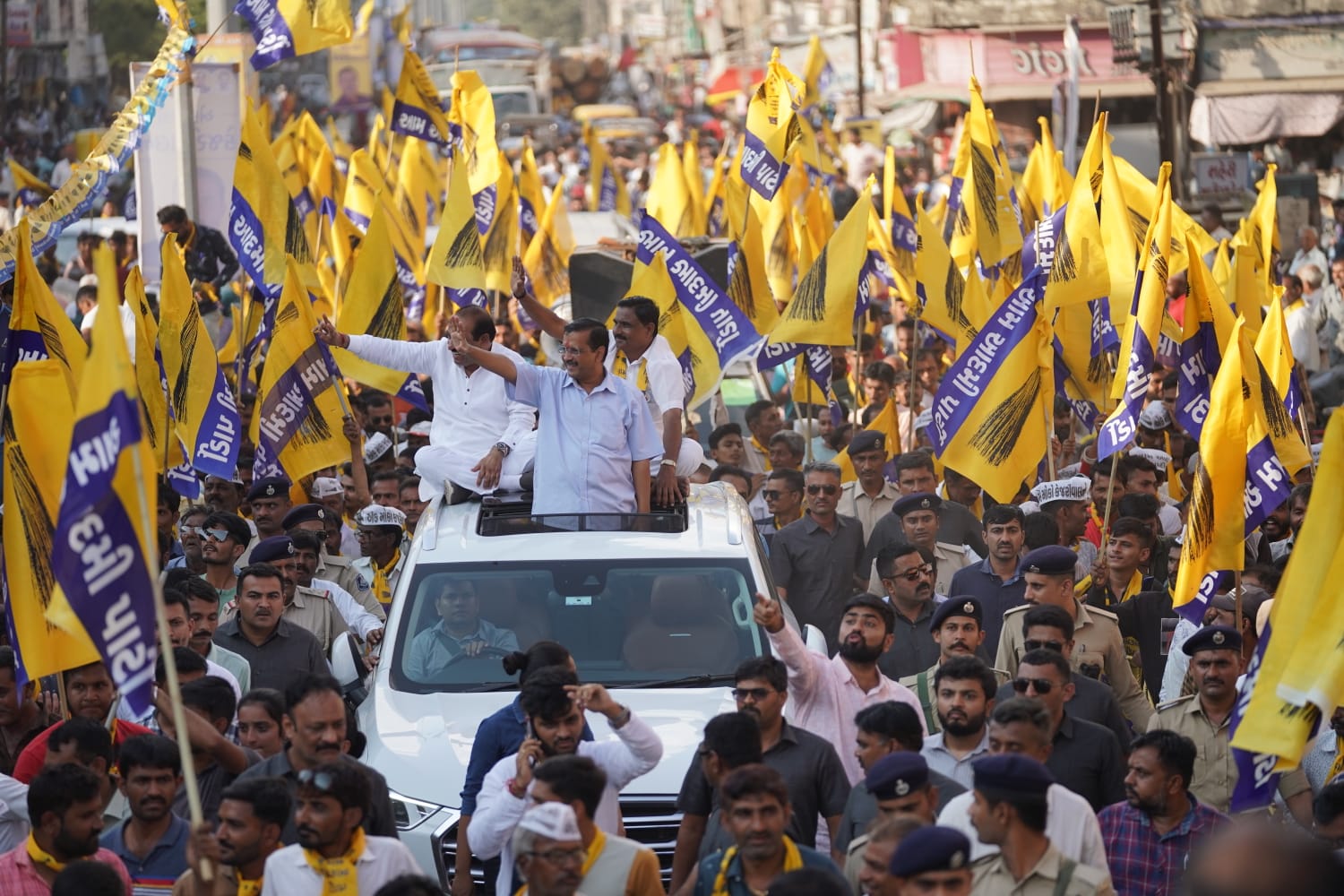 NEW DELHI: The Aam Aadmi Party (aap) is aggressively trying to position itself as the ruling BJP’s main contender in the upcoming Gujarat Assembly elections, notwithstanding its poor show in the 2017 state polls when all its 29 candidates lost their deposits.

The AAP claims it has now been successful in reaching out to the people of Gujarat with its national convener Arvind Kejriwal having visited the state multiple times in the recent past, offering a slew of ‘guarantees’ if the party is voted to power.

The party has also named Isudan Gadhvi, a former TV anchor and journalist, as its chief ministerial candidate for next month’s Gujarat Assembly elections.

A candidate loses deposit in an election when he/she fails to secure one-sixth (16.7 per cent) of the total votes polled in the constituency.

Before the 2017 Gujarat Assembly polls, the AAP had fielded candidates on 24 out of the 26 Lok Sabha seats from Gujarat in the 2014 general elections and its nominees fared badly.

The party stayed away from Gujarat during the 2019 Lok Sabha elections.

In both the 2014 Lok Sabha polls and the 2017 Gujarat Assembly elections, the AAP fared badly with majority of its candidates securing less number of votes compared to the None Of The Above (NOTA) option, as per statistics shared by the Election Commission.

But, the party is now trying to project itself as the BJP’s main challenger for polls to the 182-member Gujarat Assembly which will be held in two phases on December 1 and 5.

AAP national convener and Delhi Chief Minister Kejriwal has expressed confidence that his party will emerge victorious in Gujarat, claimed that people of the state are fed up of the “27 years of the BJP’s misgovernance.”

“We were pretty new in Gujarat in 2017 and were unable to convey our message to the people of the state effectively enough to persuade them to vote for us. Reaching out to the public is vital but the campaigning was not done properly,” an AAP leader told PTI.

“This time around, we have been successful in conveying our points to the public,” he claimed.

Out of 29 AAP candidates in the 2017 Assembly election, only Nagjibhai Ambaliya, who contested from Katargam seat in Surat district, had secured more votes than NOTA.

He had polled 2.29 per cent of the votes compared to 0.94 per cent going in favour of the NOTA option, as per the EC data.

Out of those 29 seats, the party has so far repeated only four candidates for the 2022 elections – Ramesh Nabhani (Palanpur), Nimishaben Khunt (Gondal), Ram Dhaduk (Kamrej) and Arjun Rathva (Chhota Udepur).

Rathva, who polled 2.77 per cent votes in the 2017 Assembly polls, was also the party candidate for the 2014 Lok Sabha election from Chhota Udepur when he got 2.10 per cent of the votes, as per the EC data.

In 2014, the AAP had contested 24 out of the total 26 Lok Sabha seats in Gujarat. Patan and Sabarkantha were the two seats where it had not fielded its candidates.

For the upcoming Gujarat Assembly polls, the AAP has so far declared names of its candidates for 158 seats.

“The AAP is not new to Gujarat. It has been existing in the state since 2014, when for the first time it contested the Lok Sabha elections,” political commentator Nishant Varma told PTI.

Since then, it has been contesting various elections, including the 2017 state Assembly polls and the 2021 local polls, he noted.

Notably, the AAP had won 27 seats in the Surat Municipal Corporation last year.

“Looking at the AAP’s performance in the past, it was nowhere closer to even local parties propped up by former chief ministers Shankersinh Vaghela and Keshubhai Patel,” Varma said.

Unlike the past, Kejriwal is this time leading the party’s election campaign by holding mega rallies and roadshows in different parts of Gujarat.

Kejriwal has anchored his party’s campaign around a slew of sops like 300 units of free electricity per month, free education in government schools, allowance for unemployed youth, Rs 1,000 allowance to women and a monthly stipend for new lawyers.

Apart from Kejriwal, the other party leaders who have campaigned in Gujarat include Punjab Chief Minister Bhagwant Mann, Delhi Deputy CM Manish Sisodia and Rajya Sabha member Raghav Chadha, who is the Gujarat elections co-incharge.