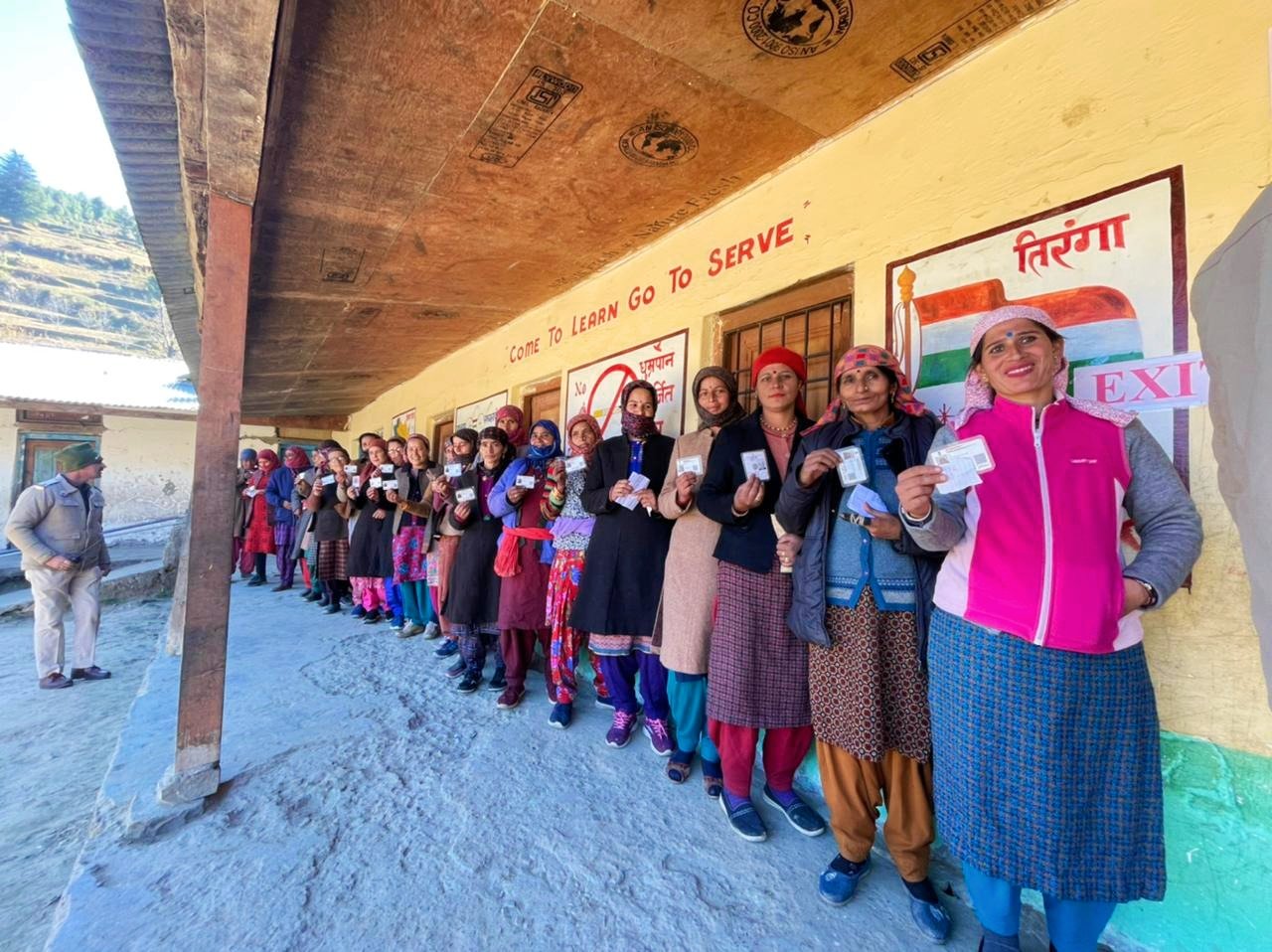 SHIMLA: Himachal Pradesh recorded a voter turnout of nearly 66 per cent on Saturday, the Election Commission said citing provisional polling figures till 5 pm for the assembly elections, a crucial test for the BJP hoping to beat precedent and return to power as well as for the Congress looking for electoral revival.

From capital Shimla to the icy heights of Spiti, people across the state voted braving cold and in the higher reaches of mountains trudging through snow to elect a new state government.

It was an honour to meet and felicitate Sardar Pyar Singh, 103 year old on International Day of elderly persons. Here, he is seen casting his vote with his same indomitable spirit and zeal, said CEO HP, Sh Maneesh Garg. @ECISVEEP @mangarg2002 #UTSAV pic.twitter.com/dLThJcEfSF

Voting began at 8 am on a slow note but picked up as the day progressed and the sun warmed the winter chill.

Till 5 pm, a 66.58 per cent turnout was recorded, according to provisional polling data released by the Election Commission (EC).

First time voters share their experience of visiting Polling Station and casting their Vote at Tikkar Polling Booth, Kasumpti. It's all in a unique and great experience for them. New and young voters have the opportunity to define India! @hpelection @DC_Shimla @AdityaNegiHP pic.twitter.com/c0eCc9UeVG

The poll panel’s data showed that among the 68 assembly constituencies in the hill state, Seraj in Mandi district from where Chief Minister Jairam Thakur contested had the highest polling percentage of 82.22, followed by Shillai 77 per cent, Sujanpur 73.65 per cent. Baijnath and Sarkaghat recorded 50.25 per cent, the lowest, and 55.40 per cent, respectively, the provisional data showed.

”The polling process was peaceful and proper arrangements were made for the same. There was no untoward incident, and elections saw a very good response from the people. Even in snowbound areas people came out in large numbers with full zeal and enthusiasm,” he told PTI.

The efforts of the Election Department and the EC towards ensuring peaceful elections could not have borne the desired results without active participation of the people, Garg said.

There were around 130 polling booths in tribal areas of Lahaul and Spiti, Chamba and a few in Kinnaur assembly constituency that were affected by snow, he said.

Dropping temperatures and advancing years failed to dampen the enthusiasm of centenarians as many of them came out to vote, with 105-year-old Naro Devi exercising her franchise in Churah in Chamba and 103-year-old Sardar Pyar Singh in Shimla.

There are over 1.21 lakh people above 80 years of age in the hill state with as many as 1,136 centenarians. The EC had made special arrangements for the elderly and persons with disabilities at polling stations across the state.

The commission said Chasak Bhatpri, an 83-year-old woman, was among those who cast their vote in the remote Bharmaur constituency in Chamba despite heavy snow.

”Bharmour is the farthest in the state being at a distance of 14 km from the nearest road head. Seeing huge response from the voters despite heavy snow,” the EC said sharing her picture in snow.

Himachal Pradesh was home to 106-year-old Shyam Saran Negi, India’s first voter, who died a few days ago after casting his postal ballot for this election.

More than 38,000 people above 80 years of age, persons with disabilities and essential service voters have cast their vote through postal ballot, the EC said.

In an early morning message to voters, Prime Minister Narendra Modi urged them to enthusiastically participate in the ”festival of democracy” and register a voting record. In a tweet, Modi also greeted young voters who will be exercising their franchise for the first time.

The chief minister echoed Modi and said every vote will help build a prosperous Himachal Pradesh. Thakur also addressed the prime minister in a separate tweet and said there was a lot of enthusiasm among voters.

”Certainly, according to your call, voters in the state will create a new record by participating in the polling and are going to create a new ‘riwaaz’ (trend). Warm greetings to you,” Thakur, who voted in Mandi with his wife and daughters after offering prayers at a temple, said in Hindi.

”We are confident of the BJP’s grand victory. We are getting good feedback,” he told reporters.

Enthusing voters to back the Congress, former party president Rahul Gandhi also asked them to turn out in large numbers and make their contribution in the progress and prosperous future of the state.

If the ruling BJP is hoping for an encore on the back of its development agenda, the opposition Congress, desperate to wrest the state back from the BJP after multiple electoral losses and losing nine states in two years, is appealing to voters to go by the four-decade tradition of voting out incumbents in the state.

The grand old party has made a host of promises, including Rs 1,500 to all women every month under the ‘Har Ghar Lakshmi’ scheme, 300 units of free power and five lakh jobs in the next five years. It has also promised a Rs 680-crore StartUp fund.

The BJP has promised implementation of the Uniform Civil Code and eight lakh jobs in the state, besides scooties to college going girls and cycles to school girls belonging to weaker sections.

More than 55 lakh voters in the state are deciding the fate of 412 candidates in this high stakes political battle. These include Vikramaditya Singh, son of former chief minister Virbhadhra Singh and state Congress chief Pratibha Singh who is contesting from Shimla Rural. He and his mother prayed at the Shani temple in Shimla before casting their votes.

Former Union minister Anand Sharma exercised his franchise in Shimla while CLP leader Mukesh Agnihotri did so in Haroli from where he is contesting.

Modi has led the campaign from the front for the BJP, wrapping up his canvassing with a personal appeal to voters of the state, saying that every vote cast for the BJP symbol ”lotus” will enhance his strength.

The BJP has also asked voters to change the ”riwaaz” by re-electing the party, saying the ”double engine” regime will continue to work for all-round development.

The Aam Aadmi Party (AAP), which is the new entrant in Himachal and is contesting in 67 of 68 seats, has been fairly quiet as the contest shaped up as a direct one between the BJP and the Congress in line with past trends.

The EC set up 7,884 polling stations, including three auxiliary voting stations in far flung areas. Of these, 789 were vulnerable booths and 397 critical ones.

The highest booth is in Tashigang, Kaza in Spiti area of Lahaul and Spiti district at a height of 15,256 feet. It caters to 52 voters. The CEO said a total of 157 all-women polling stations and 37 persons with disabilities (PWD) dedicated polling stations. Besides, arrangements of creches were also made in many districts such as Hamirpur, Una, Chamba and Kinnaur, Garg said.