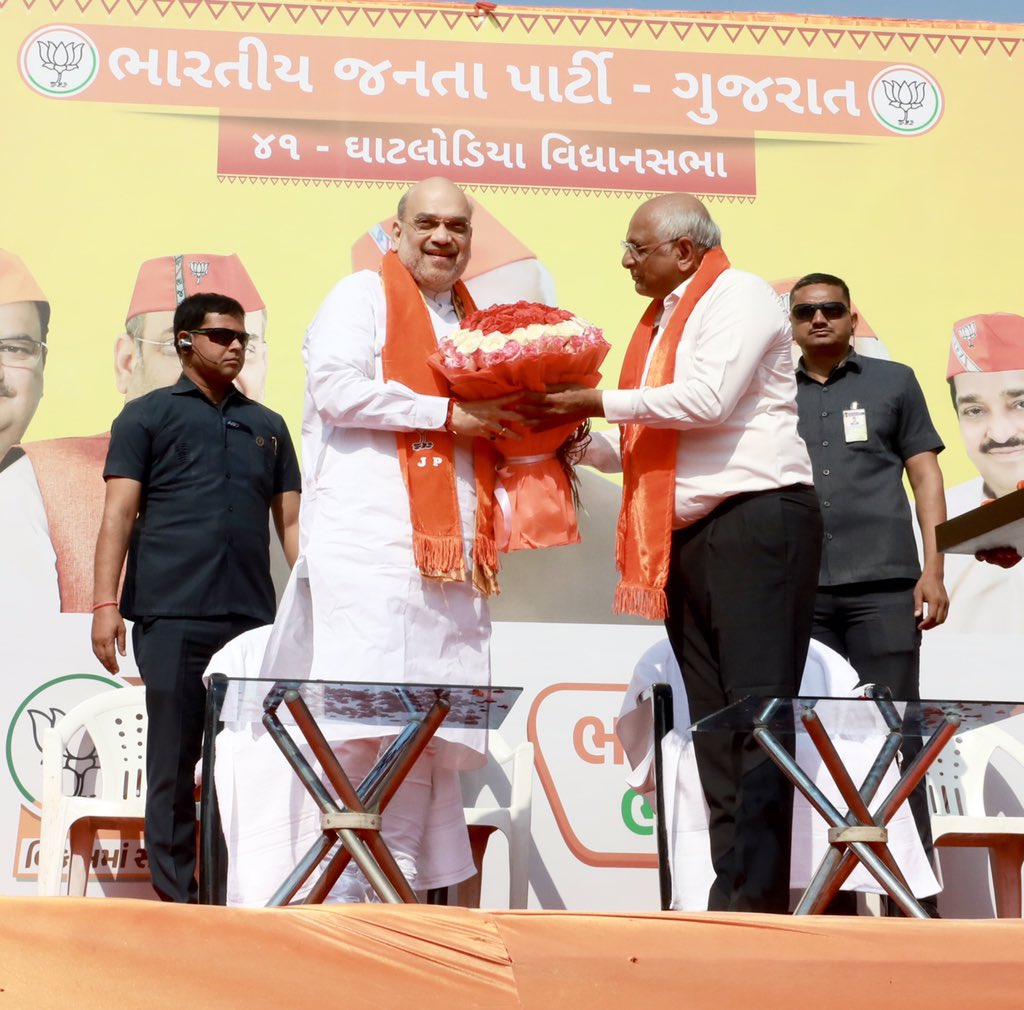 NEW DELHI: Union Home Minister Amit Shah on Wednesday said the BJP ended ”appeasement politics” and established the rule of law in Gujarat during its 27-year rule and slammed Congress on various issues. Shah alleged the Congress used to mock Bharatiya Janata Party (BJP) and its cadres over the construction of the Ram temple in Ayodhya and asked Rahul Gandhi to visit the temple, which he said will be ready for inauguration in January 2024.

Shah was speaking at an election rally in support of Gujarat Chief Minister Bhupendra Patel, the BJP’s candidate from the Ghatlodia seat in Ahmedabad city.

After the rally, Shah and Patel led a roadshow up to the Sola area where Patel submitted his nomination papers for the next month’s elections to authorities. Gujarat is scheduled to vote in two phases on December 1 and 5. The counting of votes will be taken up on December 8.

The BJP is eyeing a seventh straight term in Gujarat, the home state of Prime Minister Narendra Modi and Shah, where a triangular contest among BJP, Congress and AAP is shaping up. ”People of Gujarat had seen the days when communal riots were common, especially between 1985 and 1995 (under non-BJP governments). Curfew remained imposed for 250 days out of 365 days (a year). Women used to pray for their family members whenever they used to visit the walled city areas,” Shah said.

Shah said the BJP governments improved the situation as a result of which no one dares to create disturbance now. ”All the Latifs and Ijju Shaikhs (two criminals from Gujarat) were already eliminated. Today, 20-year-old youths do not even know what curfew is like. We eliminated the appeasement-based politics and established the rule of law in Gujarat,” the Gandhinagar MP said. The Ghatlodia assembly segment is part of the Gandhinagar Lok Sabha constituency.

In the 2017 elections, Patel was elected from Ghatlodia with a huge margin of 1.17 lakh votes. Shah said Congress used to mock the BJP and its cadres for supporting the construction of Ram Mandir. The party created legal hurdles to delay the temple construction, he alleged.

”Earlier, Congress used to taunt us saying when the temple will be built. Now, when the temple is getting ready for its inauguration in January 2024, Rahul Baba can visit the temple. Prime Minister Narendra Modi has solved this 550-year-old dispute peacefully,” he said. Shah praised the prime minister for abrogating Article 370 (which granted special status to Jammu and Kashmir) and bringing a law banning the practice of triple talaq.

”I want to congratulate CM Bhupendra Patel for demolishing illegal mazars (a Muslim shrine or enshrined tomb) and other illegal constructions which mushroomed in Beyt Dwarka (a small island off the coast of Dwarka) over years. There were more mazaras than the population,” said Shah.

He termed Patel as the ”future CM” of Gujarat and urged the voters to elect him by a huge margin.