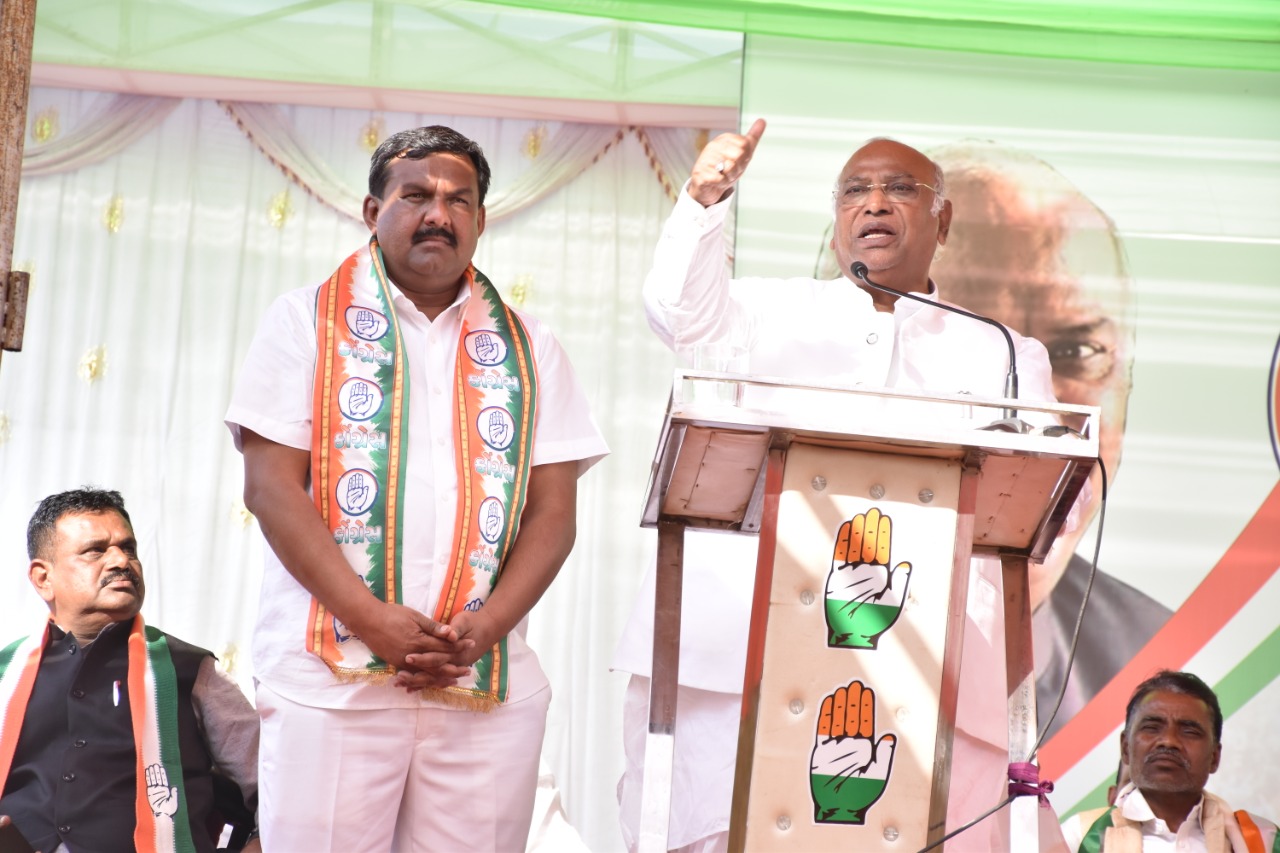 BHILODA: Congress president Mallikarjun Kharge on Friday claimed the Bharatiya Janata Party (BJP) dispensation in Gujarat was not filling up five lakh posts in government and semi-government departments and institutions because half of them will go to aspirants from Dalit, tribal and other backward caste communities.

Kharge, addressing an election rally in the Scheduled Tribe (ST)-reserved Assembly constituency of Bhiloda in Aravalli district ahead of the second phase of polling on December 5, alleged the BJP-ruled state has seen a 17 per cent rise in cases of atrocities against Dalits and adivasis.

He said Prime Minister Narendra Modi and local leaders talk about a ”double engine” government, a term often used by the BJP to highlight benefits of having the same party in power at the Centre and states, and questioned why this ”engine” failed, leading to Gujarat having three chief ministers in six years.

The BJP has brought in an army of five party chief ministers, 40 central ministers and 150 ministers of neighbouring states to campaign against the Congress in Gujarat, where the first phase of polling covering 83 Assembly seats was held on December 1, Kharge maintained.

”On one hand there is inflation and on the other hand unemployment. There is no job for the poor. All the jobs are either on daily wages or contract basis. Today, five lakh posts in government and semi-government institutions are vacant (in Gujarat),” the Rajya Sabha MP said.

The Congress president alleged the BJP government is deliberating avoiding filling up these posts.

”Why don’t you fill up the posts? Because if they fill these five lakh jobs, then adivasis, SCs (Scheduled Castes) and backwards (OBCs) will get 50 per cent of these jobs. This is why they do not want to fill them up,” he said.

”Was the Constitution framed for this purpose? Did we gain Independence to get our rights snatched? The BJP is working to take away what the Congress made available to people,” said Kharge.

The Congress leader said all pro-people and welfare-orientated laws were framed when his party was in power.

”All these laws were framed by the Congress, you (the BJP) did not make any law. You snatch our land, forests and water, but the Congress party will not let you do this. We will fight to safeguard them,” he said.

He asked as to where BJP leaders were during the freedom struggle and when the Constitution was being framed, adding Congress leaders like former prime ministers Indira Gandhi and Rajiv Gandhi sacrificed their lives to keep the country united.

Kharge said the saffron outfit had a huge ”washing machine” to ”dry clean” corruption taints of a leader as soon as he joined the party.

”The BJP is buying MPs and MLAs. Those who do not listen to them are being implicated in false cases of the Enforcement Directorate, Income Tax and others. If one does something wrong, he needs to be taught a lesson,” he said.

In several states, the BJP came to power by threatening members in the opposition and joining hands with graft tainted people, Kharge alleged.

On the Morbi bridge collapse, in which 135 people died on October 30, Kharge claimed BJP leaders did not shed a tear over the tragedy and only announced a compensation of Rs 4 lakh for the deceased.

”No development is happening, and they ask repeatedly what the Congress did in 70 years. You ruled (Gujarat) for 27 years, and even before that you ruled in the name of the Janata Party,” the Congress leader said, questioning the BJP over its claim of growth in the state.

The Congress president said the BJP was creating divisions among people in the name of religion, and maintained that when Prime Minister Modi is in Gujarat, he only talks about himself.

The second phase of voting for 93 seats will be held on December 5, while the first round on December 1 covered 83 Assembly segments in the 182-member House.

Poll results will be announced on December 8.